With this Astoria badged Mazzer Super Jolly i’ve started a new category on my blog. You will find this and my other current projects under, you guessed it, “Current Projects“. I found this grinder locally on a classifieds website. The seller didn’t specify which brand or model it was, but i recognised its shape immediately. The grinder was cheap enough but somehow it was still listed after being on that site for about a month. When i asked the seller if he still had it for sale i was quite amazed he still hadn’t sold it yet. It did look quite beat up, but these grinders are known to stand up to just about any kind of abuse… 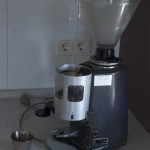 Astoria grinder, minus a doserlid

When the mailman dropped off the box this Astoria was shipped in i was furious. The box was about 2.5 times bigger than the grinder and when the mailman handed the box over to me i felt the grinder rolling side to side. When i opened it i found the grinder, hopper and two old tablecloths. That’s it. I assume the seller initially wrapped both the hopper and grinder separately in the tablecloths but that would never have been enough for a grinder that weighs over 12 Kilograms (about 25 pounds). Luckily the hopper and its lid survived the trip somehow. Upon further inspection i did find the doserlid missing, which i recovered in several parts tangled in the old tablecloths. 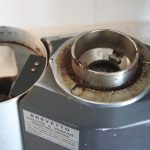 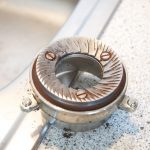 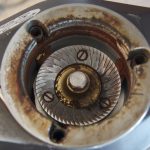 … and a dull bottom burr.

After i had calmed down a little i put the grinder on our counter and noticed it was somewhat different from my own Mazzer Super Jolly. I found a counter on the bottom right of the doser that keeps track of home many times you’ve pulled the handle / clacker. Shows a little over 8500. The handle itself didn’t return to it’s default position either so i knew i had to replace a certain spring.

Next i noticed a microswitch in the upper half of the doser, which is a spill-protection feature that switches the grinder off when the doser is full. The hopper looks a little faded but a good clean and buff will probably be the answer to that minor inconvenience.

The most important part of any grinder are its burrs and they generally are the first things to look at when buying a second hand grinder. If the burrs are dull you should be prepared to buy and install a new pair, which is quite easy but can get very expensive depending on which type and grade of burrs you need. The burrs on the Astoria are beyond dull. In fact, i can’t even feel any sort of edge on them at all anymore. Even though the previous owner provided me with plenty of proof in the form of stale and old grounds throughout the grinder and the box it came in, i can’t even begin to understand how these burrs created any sort of actually “useable” grounds.

In the next few weeks i will be restoring this Astoria to look and function as good or better than new, ridding it of its hideous paint, various defects, dull burrs, old grounds and who knows what else i’ll find. Expect another post on this once i’m done. With that said, keep checking this section because i have more projects on their way here.