A little over 2 weeks ago i got my hands on another little project. I’ve been interested in the inner workings of espressomachines for a while now and i was looking for an easy machine to start tinkering with, preferably with as little electronics as possible. I found one on eBay that fit the bill and needed some work.

The seller on eBay mentioned a broken heatingelement as the problem and that he/she couldn’t find a replacement because the manufacturer didn’t have spares anymore. When buying machines that need parts replaced it’s always best to check if you actually have a source for those parts before committing to a job you have no way of finishing. I knew there were still parts being sold for this machine, even heatingelements.

The machine was decently packaged and shipped but it wasn’t all that clean. Not so bad but i still had to see what was actually wrong with it. When i first plugged it in and switched the machine on my entire kitchen was suddenly blacked out. Alrighty, electrical problem it is. I opened up the machine and started unplugging things to narrow down the problem, which eventually ended up being the heatingelement like the seller mentioned. 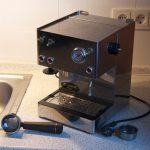 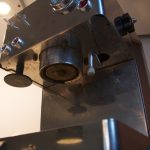 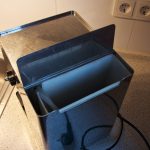 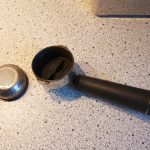 Wow this thing is BLACK! 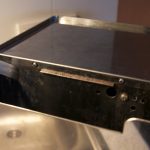 2 Screws to get to its guts 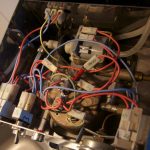 Guts! Always take overview pictures of the wiring before yanking stuff out

To get to the heatingelement i had to get rid of all the wiring, switches, lights, the pump plus tubes and remove the steamvalve. Once that was all out you’re left with pretty much an empty chassis and a grouphead / boilerunit. Once that unit was removed from the chassis i removed the top half of the boiler and found quite a lot of calcium deposits just moving about. Considering the fact that it was probably used with unfiltered water it wasn’t a big surprise. 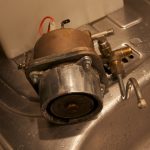 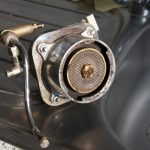 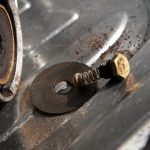 Removed the showerscreen and pressurevalve 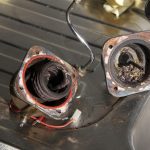 Could’ve used a descaling or two…

Once the top half of the boiler was out i could easily get to the heating element. I removed the heatingelement and used a multimeter to test give it a quick test to see why it insisted on blacking out the kitchen. It turned out it didn’t just conduct electricity from one connector to another (which is normal) but also from either connector to the housing, which shorts out the circuit and causes a dark kitchen.

Obviously the machine needed a thorough cleaning and some parts had to be replaced. I placed an order for all the parts i needed and started cleaning. I put the brass and other unchromed parts in a citric acid solution (see “Descaling a La Pavoni Professional” for more info) and put the portafilter, steamwand and several other parts (including some of the Astoria grinder i’m restoring) in Pully Caff, a coffee grease remover that doesn’t affect chrome. The chassis was thoroughly cleaned as well and the outer part of the grouphead was polished as well. 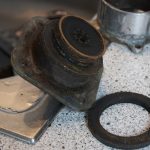 Black brass anyone? Looks like the portafilter seal is past due too 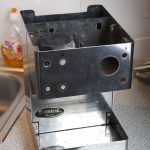 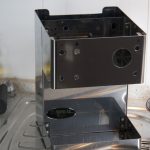 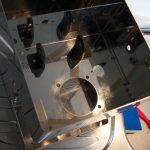 Once the new grouphead seal and heatingelement came in the grouphead / boiler unit was reassembled. The o-rings in for the steamvalve were both replaced for new ones as well and the whole unit was then mounted back into the chassis. The pump was reinstalled and the hoses were re-attached. 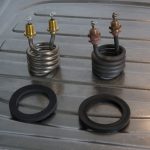 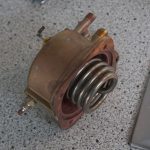 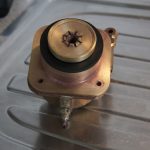 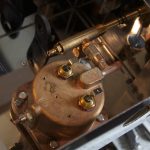 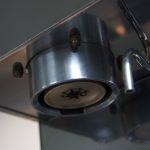 Buffed the grouphead cover as well

Once all the mechanical parts were back in the chassis it was time to test if my documentation of the wiring had been sufficient. It’s healthy habit to take as many notes and pictures as you can as finding electrical schematics for your particular project might be quite hard and they might even differ from revision to revision. In the end i took enough pictures and notes and putting the “extensive” amount of electronics and wires back into the chassis was a piece of cake. The original powercable however looked a little worn and tired too, so replacing it with a new one seemed like the reasonable thing to do. 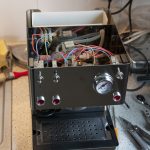 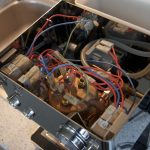 Everything connected as it should be

The Isomac Giada has now been restored to work as new and look as good. This machine was an easy intro for me as to how these machines actually work and i’m exited to find a new patient, whatever make and model that might be. This machine will be sold to someone who hopefully will take good care of it. 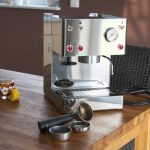 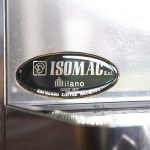 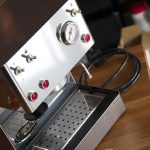 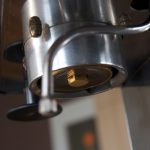 [Update] A buyer asked me for shotcharacteristics so i pulled a few shots to dial in my Mazzer and took some pictures. These pictures are from the last shot and show a very nice crema and nice rich color. The shot itself didn’t differ too much in taste compared to shots pulled on my La Pavoni Professional. I used 10 grams of Quijote Kaffee‘s “Oh Harvey” blend (my favorite by far). Obviously i haven’t fine tuned the grinder or figured out the optimal fill amount for the single (or double) basket, but that’d be next to impossible within 2 or 3 shots. I’m quite happy with the results however. 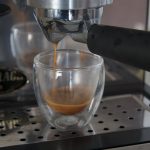 Good crema right from the start 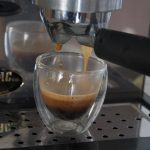 and great crema all the way to the end