To hopper or not to hopper

When I bought my first Mazzer it was incomplete and missed a few parts. One of those parts was the hopper, the plastic container on top of the grinder that stores the beans until they reach the grinding chamber where they will be ground. A key part don’t you think? I thought so too…

Beanhoppers are standard equipment on 99% of all coffeegrinders, especially on grinders that are used in coffeeshops or anywhere else where large volumes are ground every day. They also funnel the beans straight into the grinding chamber without spilling them all over the place.

However, if you don’t drink a lot of coffee that means those beans are probably going to sit in the hopper for a long time and we all know that beans that are exposed to open air too long go stale very fast. The obvious choice would be to measure the amount of beans you need, put those in the hopper and then grind them accordingly. That is what we call “grinding per shot”.

… or not to hopper

In my case however, i didn’t even have a hopper. While i debated using a hopper or not i found out that putting beans in the opening where normally the hopper resides and then turning on the grinder, is a BAD idea. I spent a good while picking up beans that got shot all over our kitchen. After that i tried the same thing again, but with a hand on top of the opening, preventing beans from bailing out.

Once i figured that out i tried using my tamper as a lid of sorts, but because it’s a 49mm tamper (for my La Pavoni) it had a big enough gap still to let the occasional bean(s) slip / shoot by. 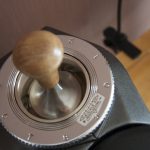 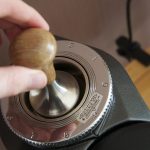 Big enough gap for beans to slip through … 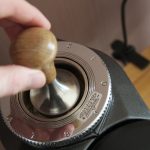 … even when it is perfectly centered.

When i was doing some research on using the Mazzer sans hopper i saw quite a few people making adapters to fit clear plastic tubes onto the Mazzers’ grindingchamber. I think it looks somewhat odd, but it did get me thinking, all i needed was something to make the mount smaller in diameter so my tamper wouldn’t leave a gap wide enough for beans to sneak past. The one problem was that the inside of that mount has a double taper, it’s smaller in diameter at the bottom than it is at the top. Basically that means i could forget about finding a standard piece of tubing or piping because those are all straight / untapered.

The only real solution to my “problem” was creating something from scratch. There are no off-the-shelf products available and even if there were, they’d probably never fit a 49mm tamper.

I bought a piece of aluminum and put it in lathe. About an hour and a half of removing aluminum we finally had the basic form and then spent a good half hour on making it presentable. 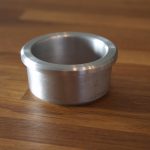 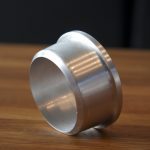 The sleeve fits into hoppermount perfectly and doesn’t vibrate or move at all. The tamper no longer leaves any sort of gap (well half a millimeter at most) and no beans have made it out so far. 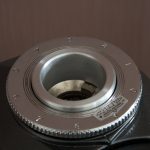 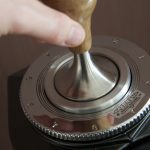 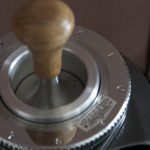 Barely any visible gap at all

The sleeve works great, holds enough beans for two shots of espresso on the La Pavoni and doesn’t spill anymore. It also looks quite nice to boot. I have since bought a second Mazzer (actually called Astoria) that did come with a hopper. I put it on this Mazzer to see what it would look like and i can’t say i was even tempted to use an actual hopper, the sleeve looks ten times better in my opinion.

Some people have mentioned not to use aluminum because it basically is an alloy * (which is bad for your health). However the beans generally don’t have more than 10 seconds of contact time (if at all) with the sleeve itself so i’m not too concerned right now. I might one day make a second one out of stainless steel though.

* A kind reader (Weev) just pointed out to me that in fact aluminum does NOT contain lead. I did a little searching around and found that there are a few aluminum alloys that contain lead but only trace amounts (0.5% and below). Most alloys however don’t contain any lead at all and the few that do have so little of it that it doesn’t create an instant health concern in this application.